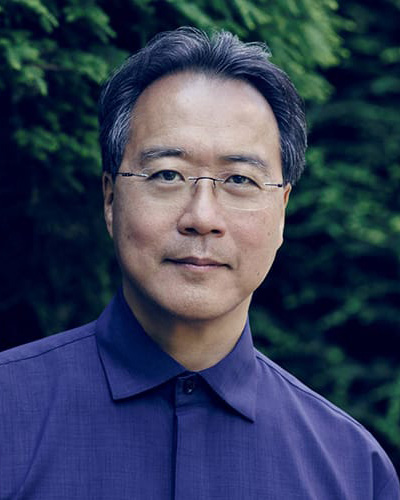 Yo-Yo Ma’s multi-faceted career is testament to his enduring belief in culture’s power to generate trust and understanding. Whether performing new or familiar works from the cello repertoire, collaborating with communities and institutions to explore culture’s role in society, or engaging unexpected musical forms, Yo-Yo strives to foster connections that stimulate the imagination and reinforce our humanity.

Yo-Yo has won 18 Grammy awards and has performed for eight American presidents, most recently at the invitation of President Obama. Among many other awards and recognitions, he has received the National Medal of Arts, the Presidential Medal of Freedom, and was named as a UN Messenger of Peace. He is also on the World Economic Forum’s board of trustees, the first artist ever to be appointed to that group.

In 1998, he created Silkroad, a collective of artists from around the world that seeks to “co-create… a musical language founded in difference, a metaphor for the benefits of a more connected world.”